We arrive to Bali

We arrive at the Bali, Ngurah Rai Airport in the wee hours of the morning. Deborah and Cindy are giving me a hard time this morning because I is so grumpy, as I am not a morning person. As we get off the plane the first thing we notice is the smell; rice and incense. It is very addicting! That beautiful smell was quickly forgotten as we then got bombarded by Balinese locals trying to help us with our baggage. It was very difficult to say “No” as they are such friendly, joking people. Deborah did not like this, and she got very irritated with the men touching her baggage. I was too amazed by the how beautiful the Balinese people were and the magnetic feeling the island has. We quickly learned that Bali is also known as the “Island of the Gods”, as the island is highly influenced by spirits as it is the only Hindu island in Indonesia. It also is the most highly populated and influential of all the islands.

We finally made it through the busy crowd towards all the taxis. We don’t have far to go as the Kuta Beach area is only about ten minutes away, depending on traffic. We arrive at our hotel just to check in and drop our bags off, as we are very excited to go catch some rays at the Kuta Beach. 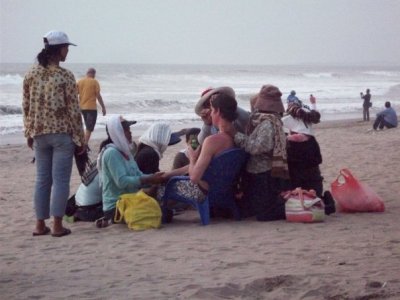 I lost my grumpiness very quickly as I am so excited to go catch some waves and do some surfing. Bali, in particularly Kuta Beach is world renowned for its top surf breaks.

Deborah and Cindy are more excited to lounge on the beach checking out the hot guys, although I did get Deborah to try boogie boarding which was definitely a highlight of our trip. What a site that was, but she did a great job! 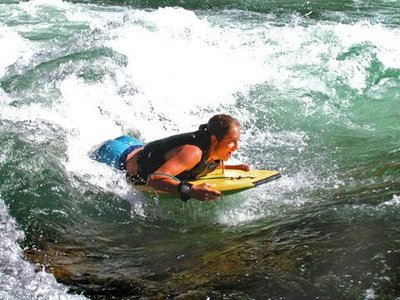 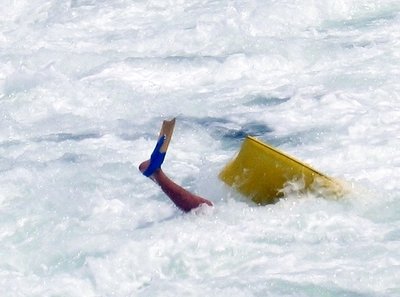 Cindy was more interested in finding more Aussie boys to flirt with and watching the local guys surf. 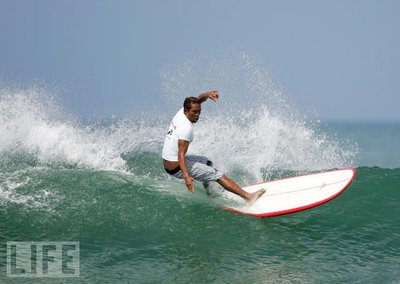 We spent the entire day lounging on the beach and sipping on Bintang beer, which was fabulous. We made sure to stay at the beach until sunset. WOW! Was it ever stunning! Kuta Beach is known to be one of the best sunset locations in Indonesia. 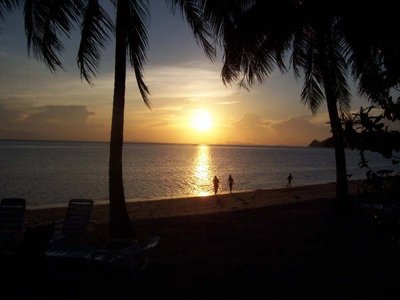 After a long day at the beach we headed back to our hotel for an early night. We have a big day of shopping tomorrow.

Deborah woke us up early today as she is very excited to go check out all the boutiques as it known as the shopping Mecca of southern Bali. We rented two small motor bikes today as it only cost $3 CAD per bike, Deborah and Cindy on one and I am on the other. Neither of them would go with me as they think I am too crazy of a driver, I crashed a bike in Thailand, 4 years ago ..... I have learned my lesson .....I swear!

Our first stop was Kuta Square; it is a boulevard style shopping centre which has a wide variety of international and local brands. I got so excited when I realized this area is a surf girls dream shopping district. I am overwhelmed and can't decide which surf store to go into first; Quicksilver, Hurley or Ripcurl. Deborah helped me decide very quickly, we went into Ripcurl in hopes of buying some new bikinis. After an extensive fashion show, we all found some very cute bikini’s that were only $20 CAD. Awesome deal! Cindy found a nice yellow one, with hope to help catch the Aussie boy’s attention. From Kuta Square we went to the Kuta Beach Shopping district, where we looked for some locally made designs. I found a very cute authentic blue dress to wear for a night on the town. Deborah helped me barter the price down so I only paid $3 CAD. We stopped at a street vendor for lunch; hopefully none of us will get sick, especially Cindy she is having a hard time with the food, as she has such a sensitive stomach. 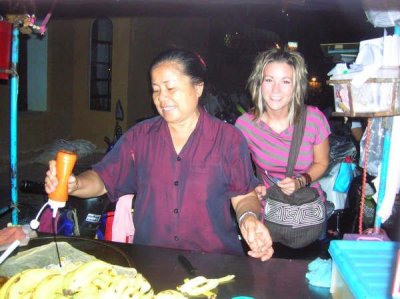 Our next stop was the Kuta Art Market, where Deborah bought so much local authentic articles she had to take a cab back to the hotel. She purchased everything from hand woven baskets, Rattan furniture, and some silver jewelry for her daughter. Deborah even convinced Cindy and I to buy a beautiful hand crafted wood carving which was made by the local Balinese people. (This was for our moms) I will say that my haggling skills improved drastically by the end of this shopping day.

We met Deborah back at the hotel to drop our purchases off and freshen up as we headed out for a night on the town in Kuta. They are very well known for great food, and a vibrant night life. We went to Chasers for dinner where we ate pizza and pasta for only $2.60CAD. From there we headed to the local Skybar which is a night club. We enjoyed the Bintang beer and the locals showing us their dance moves. Before we knew it Deborah was up and showing the locals how us Canadians girls dance. It did not take long for Cindy and I to join her. What a great evening! We managed to get back to our hotel safely and woke up the next morning with a splitting headache! I wonder why?? CERIA!! CHEERSS!! 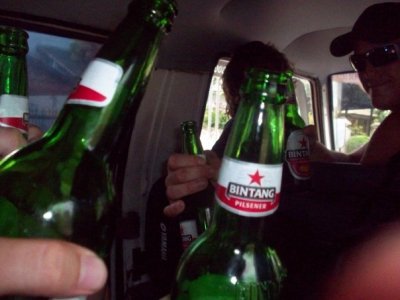 Previous Next Table of contents

Awww!!! that's my Suey right there in the picture!!! hee hee Bali is such a romantic destination!!! good choice, good choice!!!

This blog requires you to be a logged in member of Travellerspoint to place comments.

If you aren't a member of Travellerspoint yet, you can join for free.